The internet is flooded with people in search of their family roots and people want to know their history and from whom they came.  This interest in roots is important in the martial arts world too.

We at Gilbert’s Korean Martial Arts are proud of our lineage; we have many years of experience and trace back to the grandmasters from the original Korean kwans (or schools) – see our chart below – we have learned from the best of the best.

For more information about the history of Korean martial arts, read the History section following this lineage chart. 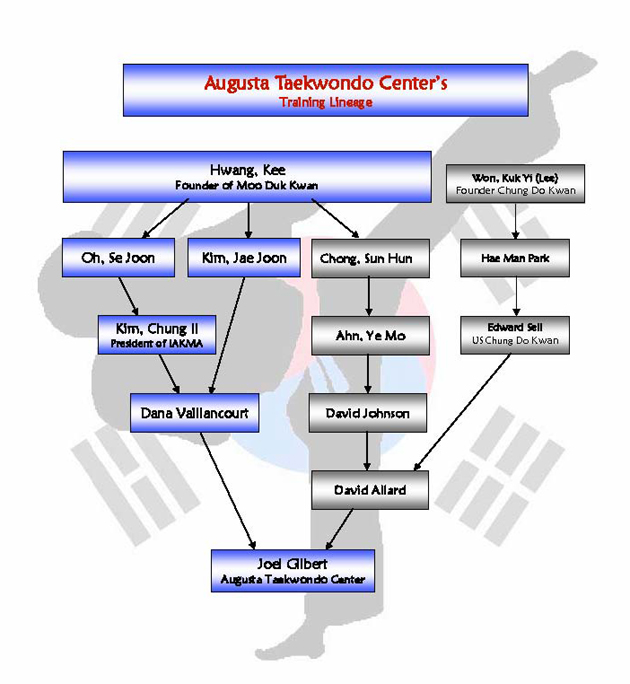 From 1910 to August 1945, the country of Korea was occupied by the Japanese who limited the availability of martial arts to the Korean population.

After gaining Independence from the Japanese, nine original kwans (or schools) surfaced in Korea.  Tang Soo Do (classic Taekwondo), first originated at Chung Do Kwan, founded by Won, Kuk Lee.

Shortly thereafter, Hwang Kee (1914-2002) founded Moo Duk Kwan, located at the Yong San railroad station in Seoul Korea, where he worked.  Grand Master Kee’s Moo Duk Kwan system spread Tang Soo Do to other railroad stations throughout Korea as his students and fellow railroad workers moved about on the railroad system.  In 1955, the Moo Duk Kwan Central Gymnasium was opened in Seoul as the hub of the spreading schools.

In 1955, the South Korean President ordered the nine Korean kwans to unify.  At that time, the art had many names -Tae Kwon Do, Tang Soo Do, Soo Bahk Do, Tae Soo Do, and Hwa Soo Do (among others).  In April 1955, a committee of several kwans determined that Taekwondo “the art of the hand and foot” would be the new name for Korea’s national martial art.

In order to create maximum power, Grand Master Kee implemented a twisting motion at the waist/hips and wrists/hands in the execution of strikes, blocks, and kicks.  Moo Duk Kwan’s generation of power through this opposite movement sets traditional Taekwondo apart from sports-oriented styles.

In recognition of Taekwondo’s relationship with Tang Soo Do, all Gilbert’s Korean Martial Arts Black Belt (Dan) students test for rank in both styles.

Grandmaster Kim, Chung Il (Dan #475) is the President of the international Association of Korean Martial Arts (IAKMA).  As Kwan Jang Nim of the IAKMA, Grandmaster Kim is a 10th degree black belt.  He has been training in the Korean martial arts for over 51 years and teaching for over 40 years.

Grandmaster Kim, Chung Il has been teaching in the U.S. since 1970, coming to Michigan at the request of Grandmaster Kim, Jae Joon (Dan #38).  He is also a former chairman, Board of Directors, U.S. Moo Duk KWan.  Grandmaster KIM, Chung Il currently oversees IAKMA activities and teaches Black Belt classes in Tang Soo Do and Taekwondo at Kennedy’s Martial Arts Academy in Elk Grove, Illinois.